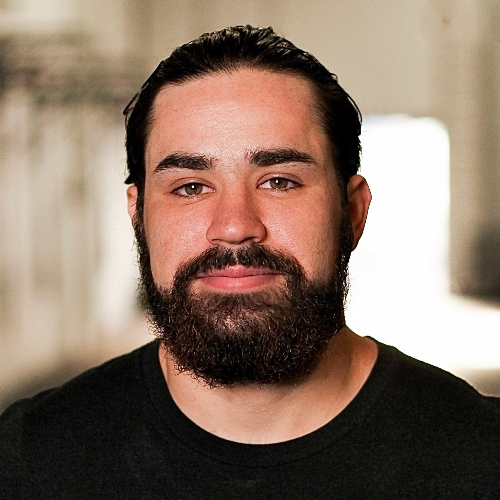 So where to start.. so while I was in the marine corps, I got sent on a deployment onto the 22nd MEU, at the bottom of the ship there’s a HITT gym where all, what I thought “beastly fit” people were. So I started working out down there doing some normal styles of lifting, (or so I thought). Then one day when I was down there there was this group of chefs, who were clearly fit as hell, snatching over 225 for reps and I was just like "what the heck is this?!", I then asked him what he was doing, he said CrossFit and asked if I wanted to join in, and I was like yeah!!! The next day we did the MURPH and when I finished the workout fell to the floor, gasping for air, I fell in love with the sport instantly. A year and a half later I became an LV 1 CrossFit coach and started coaching my Marines, and since I’ve been out of the Marines I’ve been coaching here at CrossFit Naples, living my best life. On a side note other than I wanted to one day become a more competitive athlete in the sport, growing up I played track, cross country, ROTC Raiders, and wrestling.

So the biggest turning point in my short-lived life so far, my biggest enemy, has always been what’s in between my own ears, when I first started working out the only thing that was on my mind was negative thoughts, like “oh, ill never get as strong as that guy” or “as fit” or the whole “ I can’t do that because I’m too weak” and these thoughts just lived in my mind for the first year or so of my fitness journey, now when I met one of those CrossFit guys on the MEU, one of the first things they said to me, in the first couple weeks, due to the fact that I was always putting myself down when I was failing at movements, he said, “ forget about what you can’t do, focus on what you will be able to do in the future, if you dwell on your failure instead of taking them as learning lesions you’ll never see that future you're striving to become.” Since then I kinda like live by failing, I welcome failing at things regardless of what it is, due to the fact that I can take what I did use that to get one step closer to whatever it is I’m trying to achieve.

So my BIGGEST motivation for coaching is to be able to inspire people to live healthier, I can’t tell you the joy it brings me when people I coach, personally train or just flat out gave some advice to regarding fitness and they come back with the news that they are starting to feel great, look great or perform better, brings the upmost joy to me, I can’t help but start cheering up!